by Oriental Art and Cultural Association

The Opening Concert: Purnama Over Pangkor This pass allows you to join The Opening Concert: Purnama Over Pangkor and Day (2) Concert: Moon Dance with The Shang Sisters

This pass allows you to join The Opening Concert: Purnama Over Pangkor and Day (2) Concert: Moon Dance with The Shang Sisters
kid aged under 12 and senior aged above 65

This Group Buying Deal allows you to join The Opening Concert: Purnama Over Pangkor and Day (2) Concert: Moon Dance with The Shang Sisters

The Opening Concert: Purnama Over Pangkor

Purnama – a bright full moon – takes its inspiration from the music and songs of a different age: the era of Merdeka, when a new country was in the making. The lyrics of that time were beautiful, the sentiments hopeful, and the melodies grew out of the rich soil of this land. With all their eccentricities, foibles and imperfections, people lived together and shared a common musical language. And the image of a new moon seems somehow to capture the spirit of those times.

One is fun, Two is merry, THREE is sublime.

The Shang Sisters’ core members are Janet Lee, Winnie Ho, and Mian Tan. All of them are credible performers on their own, each with more than ten years of performance experience.

The Moon is timeless, the Moon is universal, so are the songs that encapsulated the many emotions we shared as human beings: the Moon and music bring us together in Pangkor island. Come enjoy the food, the music, the scenery, and being together from Sunset to Moon Rise.

Tay Cher Siang started his piano lessons learning classical music. He took up an interest in Jazz during his teenage years and began to pursue his musical journey as a jazz pianist. He received his Masters in Jazz Pedagogy under the tutelage of Dr. Miltenberger and Professor Scea.

In 2016, Tay won three Kaki Seni-Cameronian Arts Awards, the most prestigious awards for Performing Arts in Malaysia, for his compositions and performances. Another nomination came in 2020, for his production of Shakespeare and Jazz concerts of which he bagged the best original composition award. He is invited to give a TedX talk at the prestigious 2018 TedX Petaling Street, and then perform with his band at the said event. Tay is also the music director and arranger for various notable Singers and musical acts in the Malaysian live music scene.

As a composer and music director, Tay has been involved with movie soundtracks, Musical productions, and Theater works. He and his band played themselves in the Hollywood blockbuster “Crazy Rich Asians”.

Tay is currently the Chairman of the organizing committee of the annual Malaysian Jazz Piano Festivals. He also is writing a bi-weekly Jazz Column on newspaper China Press, and he hosts a weekly Jazz radio program on City Plus FM.

Musician and Vocal Line Up

Formed in 2006, WVC Jazz are one of Southeast Asia’s leading contemporary jazz bands. The group has toured extensively in the region, recalling the spirit of being on the road – the lifestyle of touring jazz bands of old. The present incarnation of WVC consists of band leader/composer/arranger/music director/pianist Tay Cher Siang, bassist AJ Popshuvit and drummer Adriel Wong. WVC have released six instrumental albums of original music: WVC TRiO (2008), Eleven (2009), In the Dark, I See Her (2011), Waiting for That Day (2014), Do Not Go Gently (2016) and Give Thy Ear (2018). Their most recent album, Purnama (2021), revisits songs from the era of Malaysian independence and presents them in fresh contemporary arrangements. WVC won three awards at the prestigious BOH Cameronian Arts Awards in 2016 and a further two awards in 2020. The band also appeared briefly in the Hollywood film Crazy Rich Asians. 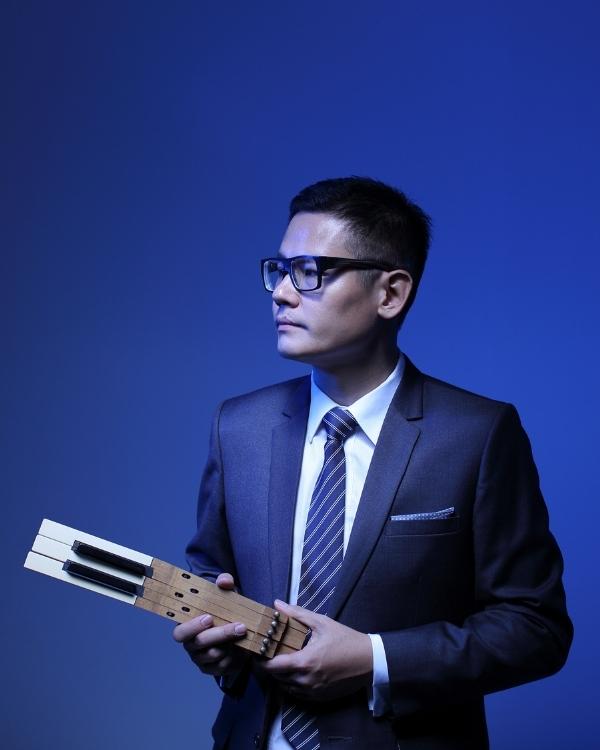 Tay Cher Siang is one of Southeast Asia’s finest jazz pianists, composers, arrangers and producers, and is currently living in Kuala Lumpur. With an early training in classical music, he took up jazz in his teens and began a musical odyssey as a jazz pianist. He studied with the renowned teachers James Miltenberger and Paul Scea in the United States, before returning to Malaysia to immerse himself in jazz education at a number of universities, while also teaching at his private studio and giving masterclasses and jazz clinics. As a pianist and composer, Cher Siang has toured extensively, performing in Asia, the Middle East, Europe and North America with both the multinational band Unit Asia, and with his own band WVC Jazz – one of Southeast Asia’s leading contemporary jazz ensembles. 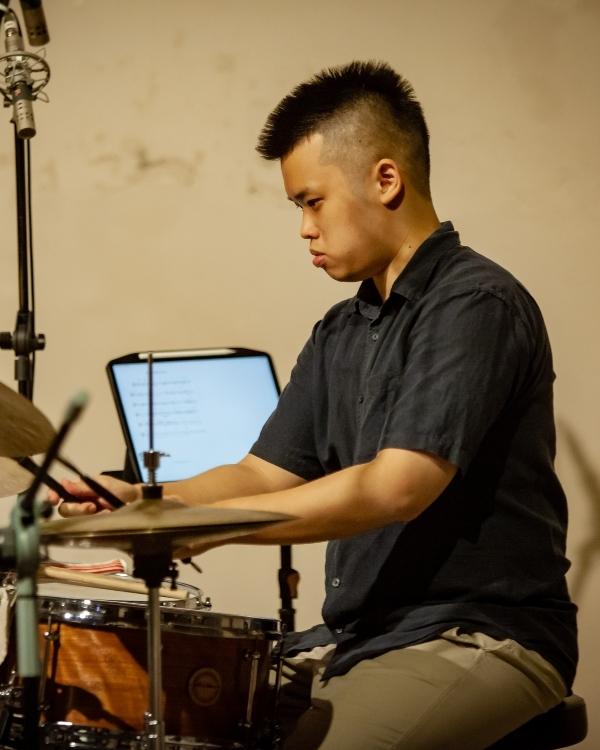 Adriel Wong graduated in 2018 with a Bachelor of Music from Universiti Sains Malaysia. Being an alumnus of the Malaysian Philharmonic Youth Orchestra, he has received exposure to both classical and contemporary orchestral music. He actively pursues a full-time music career by engaging in projects with musicians locally and internationally, mostly as a jazz drummer. He is currently the drummer for WVC Jazz, and has been a sideman for notable musicians including Tay Cher Siang, Michael Veerapan, Julian Chan, Gabrielle Stravelli, Patrick O’Leary, Chi-Pin Hsieh, Kai-Ya Chang and Yuki Arimasa. 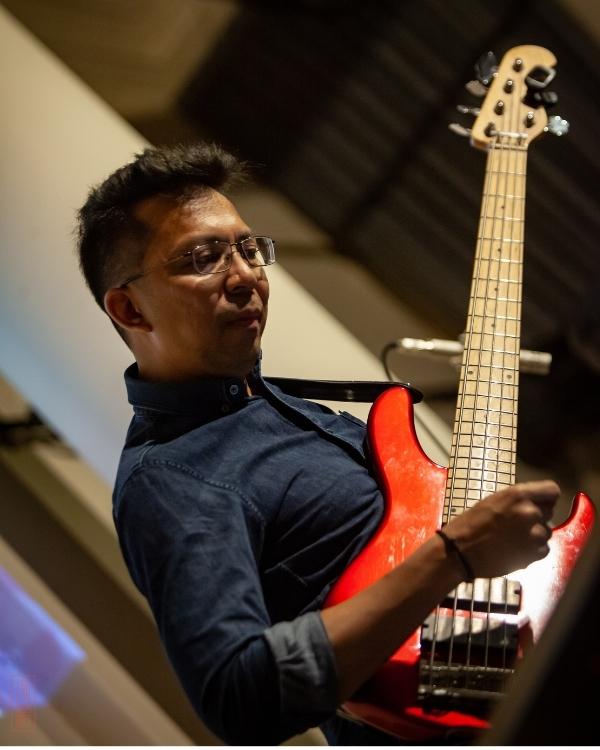 AJ Popshuvit is a founder-member and bassist of WVC Jazz, one of Southeast Asia’s leading contemporary jazz bands, with whom he has toured extensively in the region.

With WVC he has played on seven albums of original music, and won three awards at the prestigious BOH Cameronian Arts Awards in 2016 and a further two awards in 2020. He also appeared briefly with the band in the Hollywood film Crazy Rich Asians. 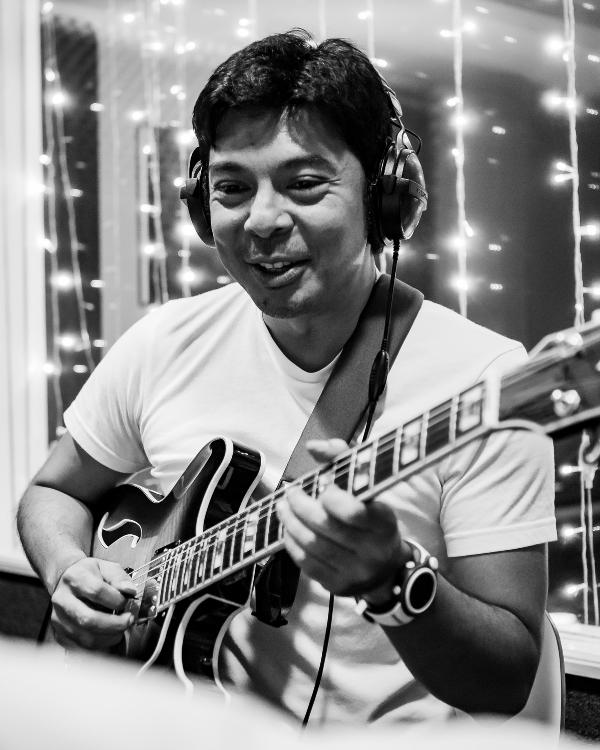 Rizal Tony is a full-time music educator, jazz guitarist, musician, music director, music arranger and composer, affiliated with Universiti Teknologi MARA. He has collaborated widely with local and international musicians and artists working in the genres of both jazz and popular music. 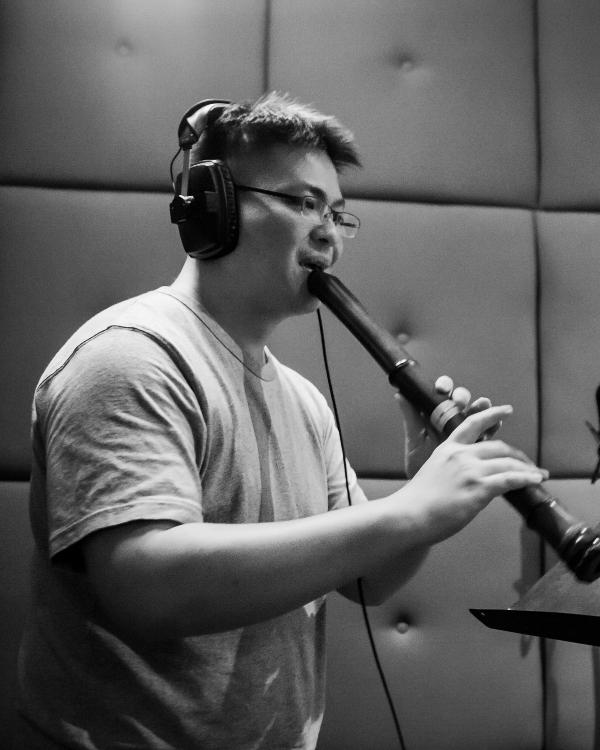 Tan Jie has been playing bamboo flutes (dizi, xiao and shakuhachi) for decades. As an educator, performer and proponent of bamboo flutes he has appeared in various musical productions in Malaysia and internationally. 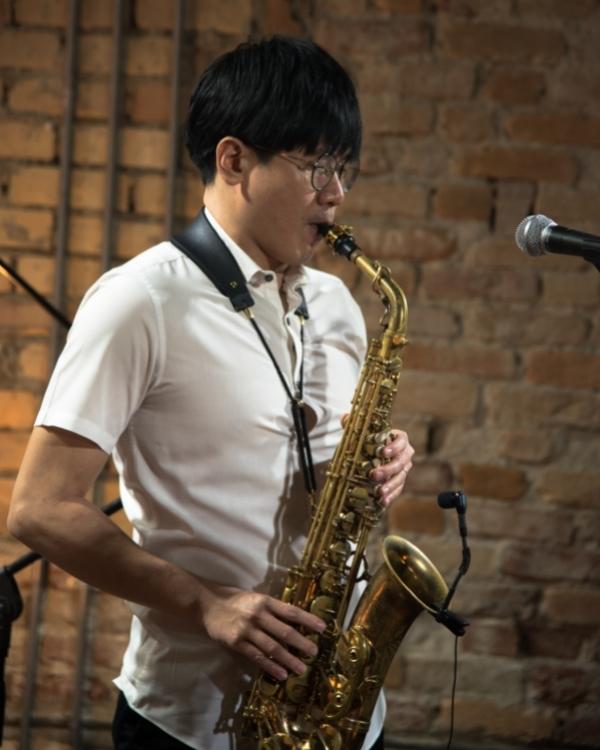 Eddy Lim is a Malaysian born Saxophonist and Educator. He started learning saxophone in a high school marching band in his hometown, Kuala Terengganu. After finishing his high school, He went to Kuala Lumpur to pursue his dream in UCSI University, where he completed his Bmus (Hons) Contemporary Music. In there, he studied saxophone under Julian Chan, Arif Yusof and Adil Johan. In 2016, He completed his Masters In Jazz Performance from the Royal Birmingham Conservatoire. Where he studied with the Jazz greats like Jean Toussaint, Mike Williams and Percy Pursglove. As a performer, Eddy has performed in various events and festivals locally and also internationally 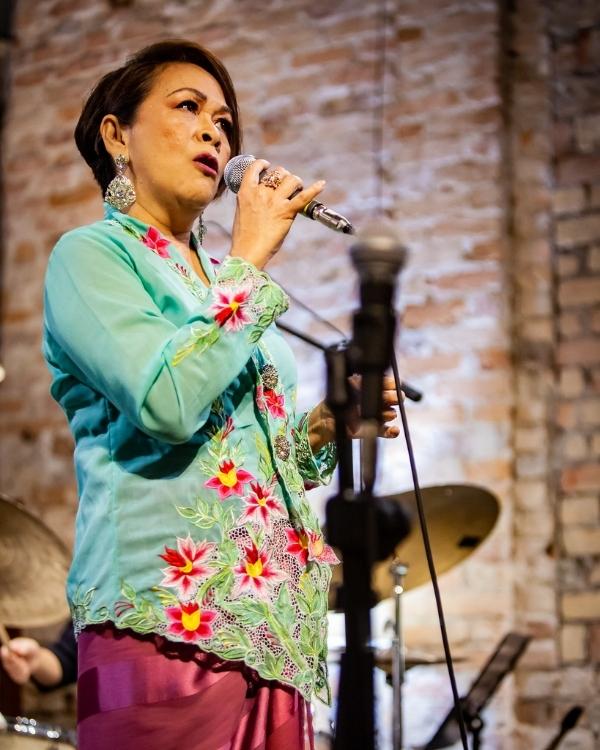 Junji Delfino is a name deeply etched in the Malaysian jazz and performing arts circles. Born into a family whose name is synonymous with music in the Philippines, she has become a vocalist of critical and popular acclaim, developing a sound and a style all her own. A gifted songwriter, lyricist and composer, Junji has released two albums. Her solo album Here I Am (2010) received rave reviews both locally and internationally, and she released It’s Christmas Time Again (with David Gomes, 2014) to great popular acclaim. She has appeared at several jazz festivals, including the first edition of KL International Jazz Festival in 2012, with performances in Southeast Asia and the United States. Junji won the Best Vocal Performer Award at the BOH Cameronian Arts Awards in 2012 for her tribute show Lush Life.

One is fun, two is merry, THREE is sublime.

Originally formed in 2014 as The Shanghai Sisters, the group presented reinterpretations of Shanghai classics through songs and dances, and garnered much recognition from the music industry. The trio performed in Hong Kong, Singapore, Thailand and Malaysia, and released a self-titled album in 2019 and the album has sold well in the region. The Shanghai Sisters were nominated under the Best Group category for the Chinese AIM 2020, which the trio also attended as an award presenter. In 2021, the group re-emerged with the new name and new vision to promote Nanyang Jazz – Chinese jazz in Southeast Asia. The Shang Sisters’ repertoire now spans a multitude of regions and eras, and is known for their ingenious fusion of the east and west, with a deep sense of Nanyang roots. With their multilingual prowess, jazzy imaginations, tight harmonies and vocals, The Shang Sisters epitomise artists of beauty and brains, an ensemble that is both contemporary and infused with a classic touch.

The Shang Sisters are set to send their music to corners of the world, spreading the beauty of jazz and the treasures of Nanyang. 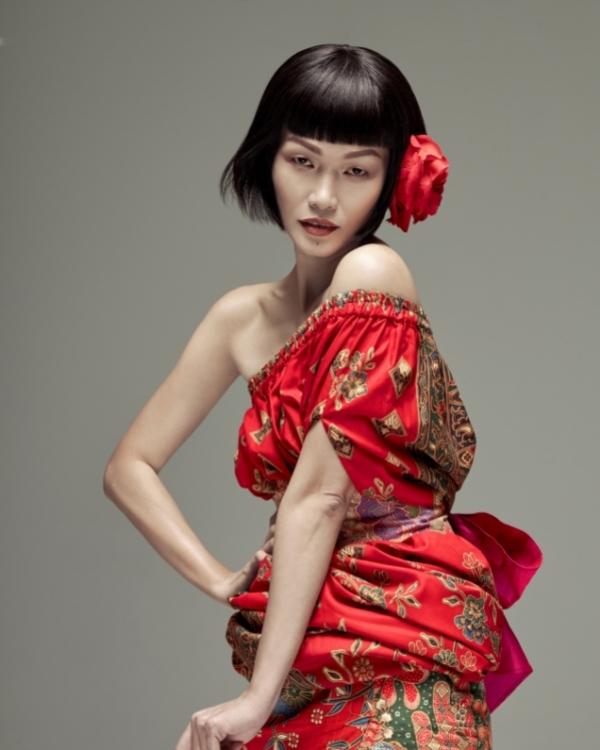 Janet has released two studio albums: Restless Heart (2015) and Cinnabar Rouge (2017). She has staged and produced two solo concerts in conjunction with the album releases, to packed houses and rave reviews.

Janet is a founding member of the Shang Sisters. Fronting the group’s public relations, she has managed and led the ensemble across numerous festivals and collaborations. 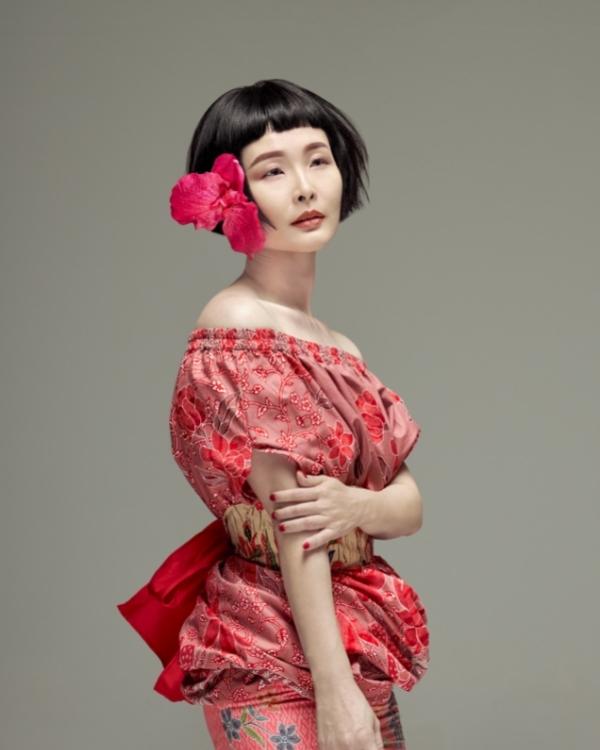 With over two decades of professional experience, Winnie Ho is a prolific, award-winning singer, producer, music educator and arranger in the audiophile and Chinese jazz scene. Some of her accolades include winner of the Astro Talent Quest and International Chinese Singing Competition, organised by Hong Kong TVB (2000), Best Vocal Performance Artist PWH Music Award (2018). Her recording portfolio spans eight concept albums, including 2v1g Vol. 1 (2008), The Jazzy Sounds of Teresa Teng (2012). She has released two self-produced solo albums: Chapter 01. Finally and Chapter 02. He Yun Ni.
Winnie’s other primary role in the Shang Sisters is music production, and she works closely with the music director Tay Cher Siang in repertoire curation, vocal arrangement and album production. 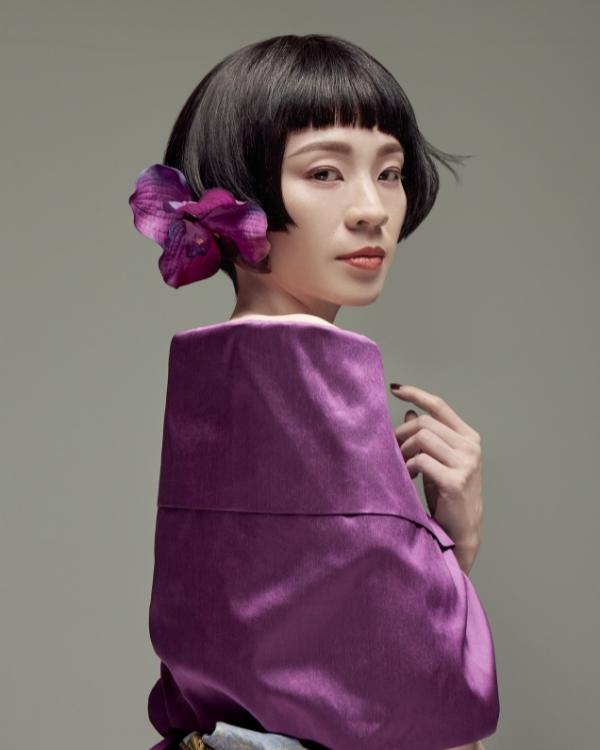 A multitalented singer, stage performer, musician and entrepreneur, Mian Tan’s music career started during her school and university years. A versatile musician and singer, she is well-versed in several music genres, from pop, indie and retro to jazz, and is a sought-after artist for concerts, private events and festivals. Her notable performances include a street festival in Hong Kong with Plan A Productions, I Have A Date with Spring musical with Dama Asia Productions, a vocal performance in a CLUB Panasonic video, and as a recording artist for Pay Fong High School’s 100th Anniversary Album.

Being the newest addition to the Shang Sisters’ line-up, Mian’s vocals and presence have brought a fresh zest to the group.